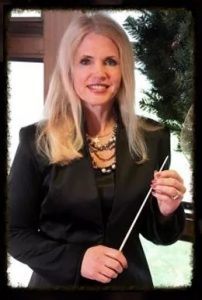 Mary Beth McCarthy serves as the Director of instrumental Music at IMSA. During McCarthy’s initial tenure at IMSA, the department grew to include two choirs, two bands, and an orchestra. Since her return to IMSA, McCarthy has revitalized the Strolling Strings Ensemble and the Chamber Strings Orchestra, as well as has added a Symphony Orchestra to IMSA’s repertoire of performing ensembles. She began her music career performing with the Chicago and DuPage Youth Symphony Orchestras. As a violinist and flautist, Ms. McCarthy has performed under many batons, including those of Gordon Peters, Dudley Powers and John Svoboda. Her primary instruments were piano, violin and flute. She won a place in the International Bel Canto Competition, and worked towards performance preparation with Met Soprano Martina Arroyo, La Scala Bass Giorgio Tozzi and San Francisco Opera Coach Natalie Limonick. Since then, she has performed with the Lincoln Opera Company, and in a variety of primary roles in numerous area productions from oratorios to musicals. She also conducts area Instrumental Chamber Ensembles and serves as Conductor and Artistic Director of the Fox Valley Festival Chorus. Recent performances as a conductor or artist include Carnegie Hall (2013), Lincoln Center (2015), The Vatican (2017) and the Rock and Roll Hall of Fame, Mainstage (2019). Her many ensembles have performed at numerous venues, from the Julliard School of Music, NY, to the Javelena Recording Studios in Nashville, TN, to Casa Loma Castle in Canada. One of Ms. McCarthy’s favorite travel memories was when she conducted the Wind Ensemble, as they were performing The Stars and Stripes Forever on the steps of Congress. Another was with the Strolling Strings, when they were invited to perform at the Drake Hotel, Chicago, for Holiday Tea. In 2012, McCarthy received, an award of excellence for Service to the Kane County Community. The other two recipients were the Mayor of Aurora and the Kane County Sheriff. In 2017, Ms. McCarthy and her Ensemble, were presented with the Seal of the City of Aurora. A favorite research experience was work on a Richter Fellowship, which took her to the British Isles. The title of her narrative music/history project was “The Anglo-Irish Conflict Illustrated by the Folk Song.” While in the Isles, she traveled to Cambridge and Oxford and interviewed members of Parliament. McCarthy also interviewed both the Administration of the Cecil Sharp House, London and Michael O’Sullibaen, foremost authority of Irish Folk Music at the University of Cork, Ireland. Her current research pertains to problem-based learning and learner-center processing strategies that expedite student assimilation and absorption of music knowledge. Ms. McCarthy received her undergraduate degree from North Central College in Naperville and her graduate degree from Northwestern University in Evanston. She served on the Northwestern Alumni Board of Directors for five years. Some of her professional affiliations include the Music Educators’ National Conference (MENC), the Illinois Music Educators Association (ILMEA), and the Association for Supervision and Curriculum Development (ASCD).